Uncover the Causes of PMS 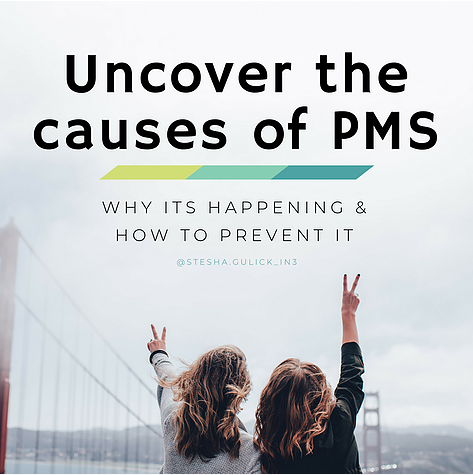 It’s that time of the month again. When everything seems insurmountable, clothes are fitting tighter, and your face has broken out into a minefield. Meanwhile, you’re craving everything in the carb aisle which just accentuates the shit symptoms you are feeling.

Ladies, raise your hand if you’ve ever used the terms ‘PMS-ing’ and/or “hormonal” to describe the symptoms you feel the week before your period!

We shouldn’t be settling for an entire week of feeling like garbage.

But first, lets back up a step. Your cycle is cyclical (duh), so you’ll naturally have rising and falling hormones throughout the month.

The first half of month: estrogen increases until it reaches its highest point, falls, and then BAM you ovulate. This is called the follicular phase, named for the FOLLICLE maturing and releasing the egg.

The second half of month: estrogen rises yet again, but this time so does progesterone. Progesterone secretion comes from that follicle that released the egg, which is now called the corpus luteum. This is called the luteal phase, named for the corpus LUTEUM maturing).

The real fun begins at the end of the luteal phase after the egg has not been fertilized. The uterus sheds its lining and both estrogen and progesterone tank. This is where things tend to get shitty…

Common misconception here I want to clear up. It’s not the HORMONES that cause PMS, it’s actually the WITHDRAWAL from the hormones that do. Similar to a drug or caffeine withdrawal.

See estrogen is a feel-good hormone – it boosts serotonin and dopamine – it sensitizes your muscles to insulin.

And progesterone is your soothing and calming hormone – It’s anti-inflammatory – it boosts the calming neurotransmitter GABA.

So now it makes sense why you feel like a total wasteland of a human during these 3-4 days before your period – you are missing your hormones!

PMS is a combination of symptoms that show up metabolically, physically, or mentally as a result of hormonal imbalances (particularly estrogen and progesterone).

The biggest hormonal disrupter I come across with clients is unbalanced blood sugar.

Yep. Chronic blood sugar spikes and crashes are no bueno for your hormones. I believe it is massively important to consider our blood sugar. It’s becoming an ever-present problem in our refined carbohydrate and stress-filled world.

Some signs that you are struggling with blood sugar imbalances:

So how do we clean up our blood sugar and thus kick PMS to the curb?

Follow these steps each and every day and not only will you balance your blood sugar, you’ll be one step closer to balancing your hormones. And balanced hormones mean you are likely to have a PMS-free cycle!

Comment below if you struggle with certain symptoms during PMS and want to know how to fix it!

PrevPreviousWhen to Eat More to Lose More
NextBe Yourself – UnapologeticallyNext