It’s easy to convince ourselves that we don’t overtrain, prioritize recovery, or eat enough calories to support our activity and health. But in the world of CrossFit where progress can be achieved weekly, it’s hard not to pursue that endless ‘high’ of progression.

With the performance, also comes body comp changes. We see a result in the mirror and we want MORE. So we work out LONGER, workout HARDER, and eat LESS until one day we wake up feeling like we’ve been hit by a bus. Our legs feel like cement blocks, lungs heavy, and about enough motivation just to roll out of bed.

We’ve been living in this dead zone for months now. We’re not performing like we used to, and even worse, we aren’t losing any weight.

…and is running rampant through CrossFit gyms everywhere.

Chad was no exception. FAT LOSS being his goal. He was aware that he must live in a calorie deficit in order to achieve those results.

But like many people, he went too LOW, too FAST and sent himself right into METABOLIC ADAPTATION. Symptoms including slowed metabolism, plateaued weight, decreased thyroid output, minimal sex drive, and a reduction in athletic performance.

Long-term, his primary goal was performance oriented which included strength and aerobic conditioning improvement in CrossFit. However, he wasn’t seeing progress due to his chronic dieting efforts.

So where do we go from here?

Simple – there’s only one way we CAN go and that is all the way UP.

Over the course of 1 month we took Chad from 2300 calories to 3050 calories. We got rid of his low carb/rest day macros and gave him a prescription that better suited a CrossFit Performance scenario. The buzz word for this type of effort is called REVERSE DIETING.

The result? A net weight loss of 11 lbs, incredibly improved performance and better quality of life, especially around the relationship he had with food and social outings.

Here’s what Chad has to say about his personal experience: 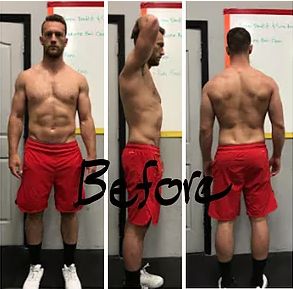 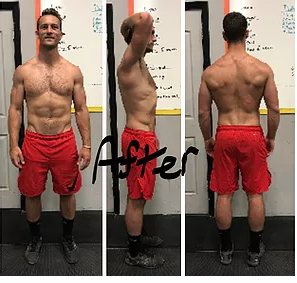 “Sports and athletics have always been a mainstay in
my life. I always tried to stay fit, even when I was little, I would run laps around my parents’ house to stay in shape for Heisey basketball…which, in hindsight, may have been the first sign of my borderline neurotic need to workout. I continued to play sports and lift into high school and college where I played football at MSU.

After football, I did the typical bro workout where chest day is every day, and leg days are far and few between. This leg day drought eventually made me realize that having a dumb looking posture and being weak wasn’t super cool, so I decided to start Wendler 5/3/1. This helped build some strength (and stifle snickers about my calves), but none of this lifting could overcome my obsession with Wendy’s baconator fries. After hitting an all-time PR on my weight at 230 and feeling like a fat ass, I decided that I needed to start eating better.

Paleo was the first thing I went to after some people from the gym I worked at suggested it. I saw good results and I went from a soft 230 to a sorta dried out noodle 205. This is also when I found CrossFit. The metabolic needs from these newly found metcons far outweighed the daintiness of paleo, so I started Renaissance Periodization. I did this for two reasons. One, I’m a slave to trends, and two, I saw that people at my gym were getting results.

I continued with RP for about a year, but still wasn’t getting the fat loss I wanted; so I started restricting calories and cutting carbs. This worked initially, but slowly but surely I got weaker, my aerobic capacity diminished, and I inevitably got fatter. So what did I do? I further cut calories and carbs, which gave the same detrimental results.

I was tired. I lost interest and dedication in the gym. I was verging on the cusp of fat kid syndrome. Luckily though, I met Stesha and talked with her about my diet. She talked with me about RP, its pitfalls, and some of the things she did and taught her other clients. After this I thought, “Yeah…she knows what she is talking about, and I don’t,” so I asked her if she would be my coach.

I then began to learn about reverse dieting and how I was under eating which was the nidus for my lack of performance. She slowly started increasing my macros. At first I felt like there was no way I could eat this much but slowly my hunger increased and I couldn’t get enough. And what would you expect with eating so much more? Exactly, my weight started to DROP and my performance shot up! Just after one month I have seen knew PRs and my workouts have felt easier. Not only that, my body composition has improved dramatically!

I feel like my diet finally doesn’t control my life. Now I can enjoy the weekends and still kick ass in the gym on Monday. I’m so thankful for Stesha and her knowledge. It has helped me find a diet I can use for the rest of my life where I know I’ll get to my goals: eating real food, tearing up the gym, and looking good naked.”