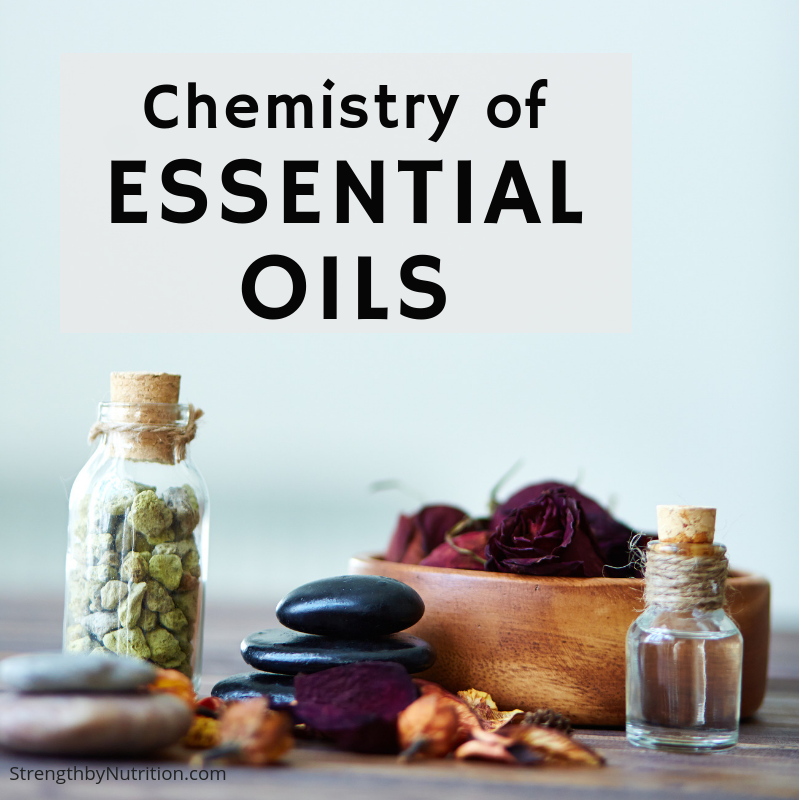 What are essential oils?

Taken directly from this critical review, “essential oils are complex mixtures of volatile compounds particularly abundant in aromatic plants and are mainly composed of terpenes. These volatile molecules include monoterpenes (hydrocarbon and oxygenated monoterpens), sesquiterpenes (hydrocarbon and oxygenated sesquiterpens), and phenolic compounds. Thanks to their chemical composition, essential oils possess numerous biological activities (antioxidant, anti-inflammatory, antimicrobial, etc…) of great interest in food and cosmetic industries, as well as in the human health field.

The term essential oil dates back to the sixteenth century and derives from the drug Quinta essentia, named by Paracelsus von Hohenheim of Switzerland. Essential oils or “essences” owe their name to their flammability.

he French Agency for Normalization: Agence Française de Normalisation (AFNOR) gives the following definition (NF T 75-006): “The essential oil is the product obtained from a vegetable raw material, either by steam distillation or by mechanical processes from the epicarp of Citrus, or “dry”” distillation. The essential oil is then separated from the aqueous phase by physical means.

Essential oils are soluble in alcohol, ether, and fixed oils, but insoluble in water. These volatile oils are generally liquid and colorless at room temperature. They have a characteristic odor, are usually liquid at room temperature and have a density less than unity, with the exception of a few cases (cinnamon, sassafras, and vetiver). They have a refractive index and a very high optical activity. These volatile oils contained in herbs are responsible for different scents that plants emit. They are widely used in the cosmetics industry, perfumery, and also aromatherapy. The latter is intended as a therapeutic technique including massage, inhalations, or baths using these volatile oils. The last key will serve as chemical signals allowing the plant to control or regulate its environment (ecological role): attraction of pollinating insects, repellent to predators, inhibition of seed germination, or communication between plants (emission signals chemically signaling the presence of herbivores, for example). Moreover, EOs also possesses antifungal or insecticide and deterrent activities.

Essential oils are produced by various differentiated structures, especially the number and characteristics of which are highly variable. Essential oils are localized in the cytoplasm of certain plant cell secretions, which lies in one or more organs of the plant; namely, the secretory hairs or trichomes, epidermal cells, internal secretory cells, and the secretory pockets. These oils are complex mixtures that may contain over 300 different compounds.

They consist of organic volatile compounds, generally of low molecular weight below 300. Their vapor pressure at atmospheric pressure and at room temperature is sufficiently high so that they are found partly in the vapor state. These volatile compounds belong to various chemical classes: alcohols, ethers or oxides, aldehydes, ketones, esters, amines, amides, phenols, heterocycles, and mainly the terpenes. Alcohols, aldehydes, and ketones offer a wide variety of aromatic notes, such as fruity ((E)-nerolidol), floral (Linalool), citrus (Limonene), herbal (γ-selinene), etc.” (PMID: 28930135).

Let’s take a look at each individual organic compound that makes up an essential oil (this information was taken directly from doTERRA University – please visit their site for the original article).

The most widely represented class of hydrocarbons in essential oils is the terpenes.

Isoprenes do not exist in nature as free molecules. Instead, multiple isoprene units are joined together by chemical bonding to form molecules composed of 10, 15, 20,…etc carbons.

This class of molecule can be identified from its scientific name, which typically uses the suffixe -ene.

When a chemical bond forms between 2 isoprene units, a 10 carbon molecule called a monoterpene results.

Monoterpenes can assume many shapes including cyclic, straight, and branched varieties.

Monoterpenes are present in varying amounts in nearly every essential oil. Common types are limonene, pinene, terpinene, and cymene,

A total of 3 isoprene units combine together to form a sesquiterpenes with 15 carbs.

They have a higher molecular weight, less volatile, and less prevalent in essential oils.

A combination of 2 monoterpene units for a total of 20 carbs.

These molecules are difficult to extract through distillation due to their high molecular weight.

These are the largest molecular weight (molecular mass in the low 300s) volatile aromatic compounds that can be collected under normal distillation conditions.

The next layer of complexity in essential oil chemistry is the addition of functional groups to terpene backbones.

Additional non-carbon atoms alters the properties of a terpene by changing its reactivity.

Oxygenated groups are the most common type of functional group found in essential oils.

Among the most widely studied and valuable functional groupd are alcohols.

This group consists of a hydroxyl group (-OH).

The name will end with the suffix -ol.

ALcohols typically have pleasant aromas that are well tolerated.

Consist of an alcohol group attached to an aromatic benzene ring.

The structure contributes to the powerful antioxidant properties of phenols as well as many other beneficial properties.

Phenol constituents are very potent, which may cause irritation to the skin.

Name ends in teh suffix – al or aldehyde

Known for their distinctly potent fragrances and are often key contributors to the overall aroma of an essential oil.

Very similar to aldehydes as they contain an oxygen with a double bond, but occurs somewhere in the iddle of a carbon chain rather than on the end.

The name has the suffix -one.at the end

Common types are carvone and menthone

Suffix ends in -yl or -ester

Essential oils have a complex composition. One single oil may contain hundreds of individual constituents from a variety of chemical families. Although this complexity may seem overwhelming to all but the most advanced scientist, it is actually a vital part of the therapeutic value of essential oils. Every different class of constituents offers unique biochemical properties that allow them to react in a certain way. Together, a variety of constituents work together as a complete synergistic unit to maximize the functionality of the oil and in turn, enhance its applicable beneficial properties. In plants, this allows the plant to be dynamic and adaptive in its environment by conferring certain protective and reproductive benefits. In humans, this allows essential oils to have endless applications to health and wellness. A single essential oil may have many functions because of their complex chemical profiles. For example, lemon oil is renowned for its powerful purifying properties and is useful as a cleaning agent. On the other hand, it has also been demonstrated to have powerfully uplifting effects on mood.

Certified Pure Therapeutic Grade® essential oils should always have certain ratios of the same core constituents, as these major constituents are largely what determine how the oil will interact in the body. Because essential oils are pure botanical extracts, the ratio of constituents will fluctuate slightly depending on the geographic location, weather conditions, soil conditions, insect presence, precipitation, temperature, distillation conditions, etc. Quality control tests should be used to monitor the chemical profile of each batch of oil and determine if it fits within the proper ranges that will result in beneficial health effects.

Several studies have demonstrated the principle of synergy. Let’s look at a few pertinent examples.

Example 1: Effectively disinfecting surfaces, and other commonly used items is a critical part of maintaining health. One study examined the effectiveness of pure eucalyptus oil compared to isolated 1, 8-cineole, a constituent recognized as the active cleansing agent in many essential oils, at eliminating microorganisms. The eucalyptus oil was shown to be significantly more effective than isolated 1, 8-cineol against potential environmental threats. These notable differences in efficacy suggest that the minor constituents in essential oils contribute a synergistic effect that improves the beneficial effects of an oil as a whole. (Hendry ER, Et Al. 2009)

Oils blends with known health benefits are produced under the direction and guidance of experts familiar with how the blending process alters the chemical profile of the oils. However, oils can also be effectively blended in your own home based on your personal preferences and desired benefit. It is important to keep in mind that blending oils may alter their aroma and beneficial properties.

Lewith GT, Godfrey AD, Prescott P. A single-blinded, randomized pilot study evaluating the aroma of Lavandula augustifolia as a treatment for mild insomnia.  The Journal of Alternative and Complementary Medicine. 2005;11(4):631-637.

Niijima A, Nagai K. Effect of olfactory stimulation with flavor of grapefruit oil and lemon oilon the activity of sympathetic branch in the white adipose tissue of the apididymis. Experimental Biology and Medicine. 2003;228:1190-1192.

Shapiro S, Meier A, Guggenheim B. The antimicrobial activity of essential oils and essential oil components towards oral bacteria. Oral Microbiology and Immunology. 1994; 99(4): 202-208.

Zhou H, Deng Y, Zie Q. The modulatory effects of the volatile oil of ginger on the cellular immune response in vitro and in vivo in mice. Journal of Ethnopharmacology. 2006;105:301-305.

Zhou H, Deng Y, Zie Q. The modulatory effects of the volatile oil of ginger on the cellular immune response in vitro and in vivo in mice. Journal of Ethnopharmacology. 2006;105:301-305.

PrevPreviousHow to Survive the Flu
NextDo Essential Oils Even Work?Next